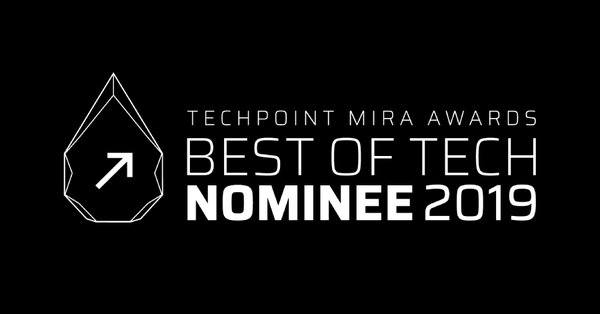 INDIANAPOLIS (Feb. 12, 2019) — 120Water has been nominated for two TechPoint Mira Awards for New Tech of the Year and the Scale-Up of the Year honor. The nominations come on the heels of the Zionsville-based firm’s selection to participate in the Imagine H20 accelerator program and growing interest from states like Colorado, Illinois, Michigan, Maryland, Ohio, Pennsylvania, Texas and Wisconsin – as well as communities throughout Indiana.

120Water’s Public Water System Platform was nominated for TechPoint’s New Tech Product of the Year, which recognizes highly innovative and ground-breaking tech products that burst onto the scene and took it by storm in the past year. The Scale-Up of the Year award recognizes high-growth, innovation-driven companies that provide technology products or services, are gaining traction and could be Indiana’s next big success stories.

“The Indianapolis tech ecosystem empowers us to acquire the talent needed to build our business across the United States and around the globe,” said Megan Glover, chief executive officer of 120Water. “We’re seeing a promising number of states and entities from outside of the Midwest take a deeper look at the transformation we’re bringing to the water sector and the value our innovations are bringing to communities looking to implement much-needed improvements to their water infrastructure systems.”

120Water also recently leveraged its Schools Platform, another innovation, to help the State of Indiana test more than 600 schools across the state for lead in drinking water. The firm recently inked a similar deal with the Chicago public-school system to test drinking water in schools and daycares throughout the city.

Nominees for the Mira Awards were selected by 48 independent subject-matter experts who evaluated and ranked the applications. Later this month, nominees will present their cases to judging panels, after which the judges will select the winners following deliberations.

TechPoint, the nonprofit, industry-led growth initiative for Indiana’s technology ecosystem, announced the nominees today for its 20th annual Mira Awards presented by Angie’s List and Salesforce. The Mira Awards gala—the biggest tech awards event in the state—celebrates the people, products, companies, and places chosen as ‘The Best of Tech in Indiana’.

Winners will be announced at a black-tie awards ceremony and gala April 13, at the JW Marriott.