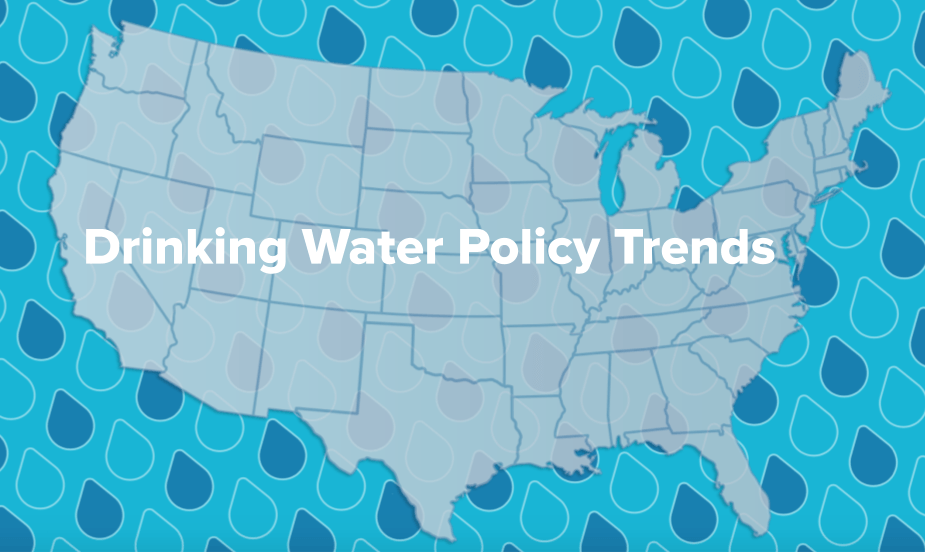 We monitored policy and legislative trends in 5 key areas of drinking water to provide an up-to-date snapshot of what’s happened this year, and what’s likely to change in the future.

The number of states considering new lead testing requirements increased by 115% for K-12 schools and 138% for childcare facilities in 2018-2019. Legislative and regulatory activity will likely continue in the remaining 23 states. All 50 states applied for federal WIIN funding, which will increase testing rates and may further drive legislative or regulatory responses.

19 states have drinking water policies targeting PFAS and 1 state requires legionella monitoring and management. States will likely continue to set health-based and regulatory standards for PFAs in drinking water, and the federal government may regulate some PFAS with an MCL in the next 2-5 years.

Infants and children under 6 are the most vulnerable population when it comes to lead exposure. As a result, it’s important to evaluate the quality of water in schools, childcare centers, and other learning environments for children.

Lead continues to be a dominant water quality issue for state lawmakers and the number of states pressing for regulatory monitoring requirements in schools and childcare facilities is steadily increasing.

At the beginning of 2019, 13 states and Washington D.C. had some requirements in place for K-12 schools while 8 states already had statutory or regulatory standards in place for childcare facilities. Eleven states introduced new legislation on this topic for childcare facilities and the state of Vermont enacted its statute. Fifteen states considered new legislation on lead sampling in K-12 schools.

Of those, 2 states (Maine and Vermont) enacted new requirements this year. Proposed legislation for schools and/or childcare centers is still under consideration in 13 additional states, which suggests the country is moving towards national testing one state at a time.

Other federal pressures and opportunities may also increase testing rates across the nation. The EPA is releasing $40 million in the form of WIIN Act Grants to state agencies who will provide testing support to schools and childcare facilities in 2019-2021, which may drive additional state legislative activity as over 350,000 childcare facilities and nearly 100,000 public schools investigate and discover lead risks in aging buildings.

Other facilities such as universities and hospitals may be a future legislative focal point. Lawmakers in the state of New Jersey proposed testing requirements for both this year.

We’re not only seeing increased attention in the form of legislation, but also funding being made available at the federal and state levels to address this concern.

States are proactively addressing the national issue of Lead Service Lines (LSLs) by requiring utilities to first identify LSLs and then to replace them. At the beginning of 2019, three states (Ohio, California and Illinois) required water utilities to submit Lead Service Line Inventories (LSLI) to regulatory agencies.

Two states (Michigan and New Jersey) drafted LSLI legislation and Michigan’s formal request for rule-making passed in March of 2019. Various Lead Service Line Replacement (LSLR) provisions were considered by three states (Connecticut, Illinois and Michigan) and are included in Michigan’s new interpretation of EPA’s Lead and Copper Rule (LCR), which now requires water utilities to replace 5% of LSLs each year for the next 20 years. This is the first example of a state using the LCR to require all systems irrespective of compliance status to locate and replace LSLs and other states may follow Michigan’s example.

In addition to state activity, other federal factors may force states to act quickly. The EPA’s anticipated revision of the LCR is currently being reviewed by the Office of Management and Budget and is expected to be released this year. Among other changes, the LCR is expected to require states to collect LSLIs from utilities.

In sum, state and federal activity around LSL management suggests water utilities around the nation will be required to act. There are an estimated 6.1 million LSLs in the nation and with typical replacement cost ranging between $2,500-10,000 per line. As the regulatory changes in Michigan suggest, it could take decades for utilities to make these costly infrastructure improvements.

The legislative reaction to this concern is slow, but many hospitals are taking action in response to federal research and resources. Since 2016, the state of New York has required hospitals to perform an environmental assessment, implement a sampling and management plan and institute control measures if legionella exceedances are found.

This year after legionella was discovered at Elgin Public Schools, the Illinois legislature directed the Department of Health to issue guidance on developing comprehensive water quality management plans in school facilities. This guidance will be a resource and not a mandate to monitor or remediate legionella sources.

In terms of the federal response, the Center for Disease Control urged Health Care Providers to focus on prevention and early recognition after recently discovering that 76% of legionella exposures in 2015 originated in Health Care Facilities (CDC, 2018). The CDC has also developed a water management program to help facilities mitigate the risk of legionella growth.

The political response to PFAs is evolving rapidly, addresses multiple sources, impacts a number of industries and is a priority in both federal and state arenas.

The EPA plans to propose a regulatory determination for PFOA and PFOS by the end of 2019 and will determine whether a broader class of PFAs should be regulated by the SDWA. This year the EPA issued a Health Advisory (HA) guidance for PFOA and PFOS which, unlike a Maximum Contaminant Level (MCL) cannot be enforced by states.

In the meantime, 19 states have passed legislation or are considering rules regarding PFAs testing, regulatory limits or health advisory standards for drinking water. Other states, such as North Carolina, are forming task forces or requiring monitoring in certain areas with known sources of contamination like the Cape Fear watershed.

The Alliance for Water Efficiency (2019) ranked water loss strategies across the nation and discovered that the number of states with some policies aimed at addressing water loss increased from 24 in 2012 to 30 in 2019. Twenty-two of these states have set statutory or regulatory limits on water loss in utility distribution systems.

With respect to water audits, the degree of oversight, frequency and validation of these audits varies from state to state as does the requirement for leak detection and leak correction. Georgia, Washington and Wisconsin have the strictest water loss standards in the nation.

How can we help?