Lead Concentrations in School Buildings: An Analysis of Fixtures with Elevated Lead Levels

At AWWA ACE19 Erica Walker and Alicia Jaquet-Morrison presented a poster on their analysis of fixtures in schools buildings with elevated lead levels.

Federal regulations limited or enforced lead in plumbing components to 8% by weight in 1986 and 0.25% of the wetted surface in 2014. Because the average school was constructed in 1957, many school facilities around the country likely contain leaded plumbing materials. State agencies in Indiana and Massachusetts ran voluntary testing programs for public schools from 2016-2018. We gathered total lead results from over 130,000 drinking water samples collected at over 77,000 fixtures in over 1,700 facilities. Our primary research questions were: 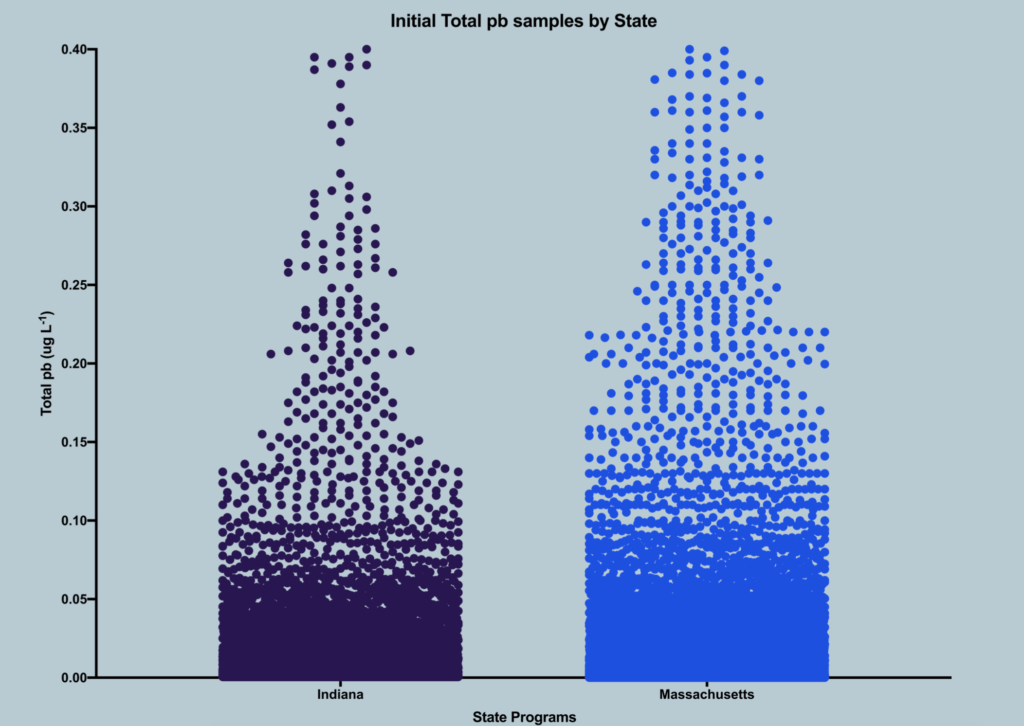 Total lead sample results from Indiana and Massachusetts school sampling programs were obtained. Most samples were collected between the months of August and May during spring and fall school semesters from 2016-2018. Elementary, Middle and High School facilities in Indiana were between 2-122 years old with median ages of 52 years (elementary), 44 years (middle) and 51 years (high). Facilities ages for Massachusetts were not available. Thirteen different fixture types were identified for this analysis. Initial samples were aggregated by school and the percent of total fixtures represented by each fixture type was calculated. The target variable was the percent of total initial samples from an individual school resulting in a pb exceedance (> 0.005 mg/L).

Feature importances was selected as a non-parametric method of demonstrating the influence of fixture type and school type on the percent of first draw samples that tested over 0.005 mg/L. Age was also included for the datasets from Indiana schools. A RandomForestRegressor from the Sklearn Python package was fit on a training dataset representing 70% of the full dataset to prevent overfitting. Sklearn GridSearchCV was used to conduct a gridsearch for maximum depth and number of estimators with a 5-fold cross validation. The best model for each dataset was identified as the one with the minimum negative mean squared error. The sklearn package SelectFromModel was used to extract feature importances.

A school type comparison was completed using the Python SciPy implementation of the Kruskal-Wallis and MannWhitney tests for pairwise posthoc testing on first draw samples. Because these results were considered initial results, no p-value adjustment was applied during pairwise testing.

For Indiana, the number of classroom faucets, coffee makers, drinking water fountains and faucets in home economics rooms were the most important features in predicting % increases in first draw samples over 0.005 mg/L. 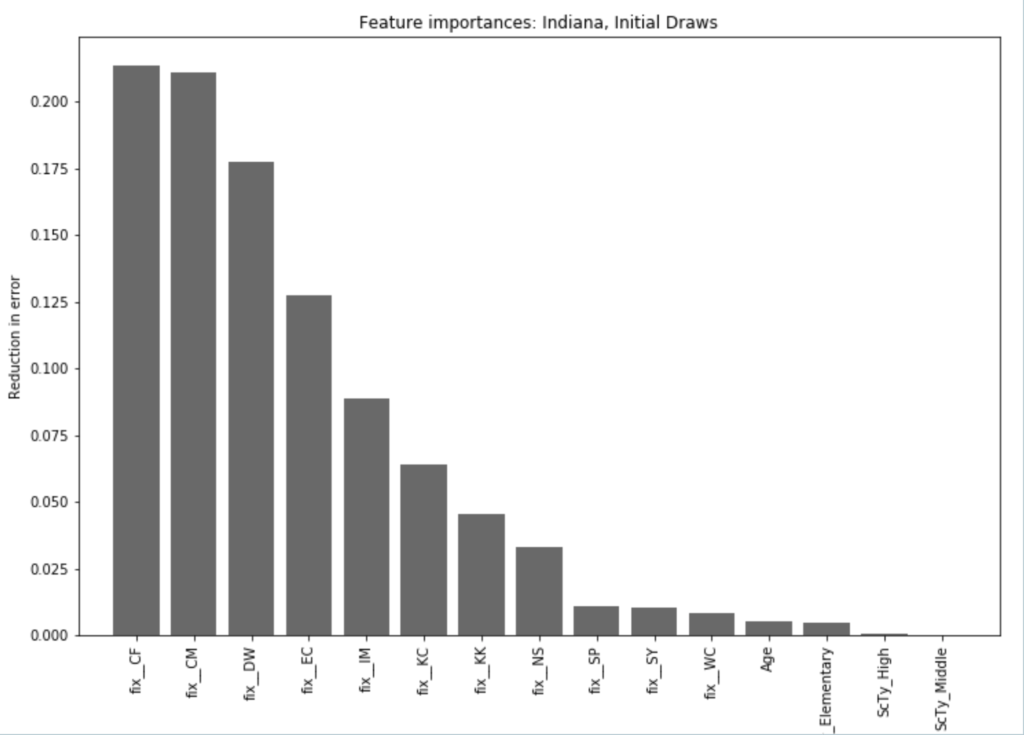 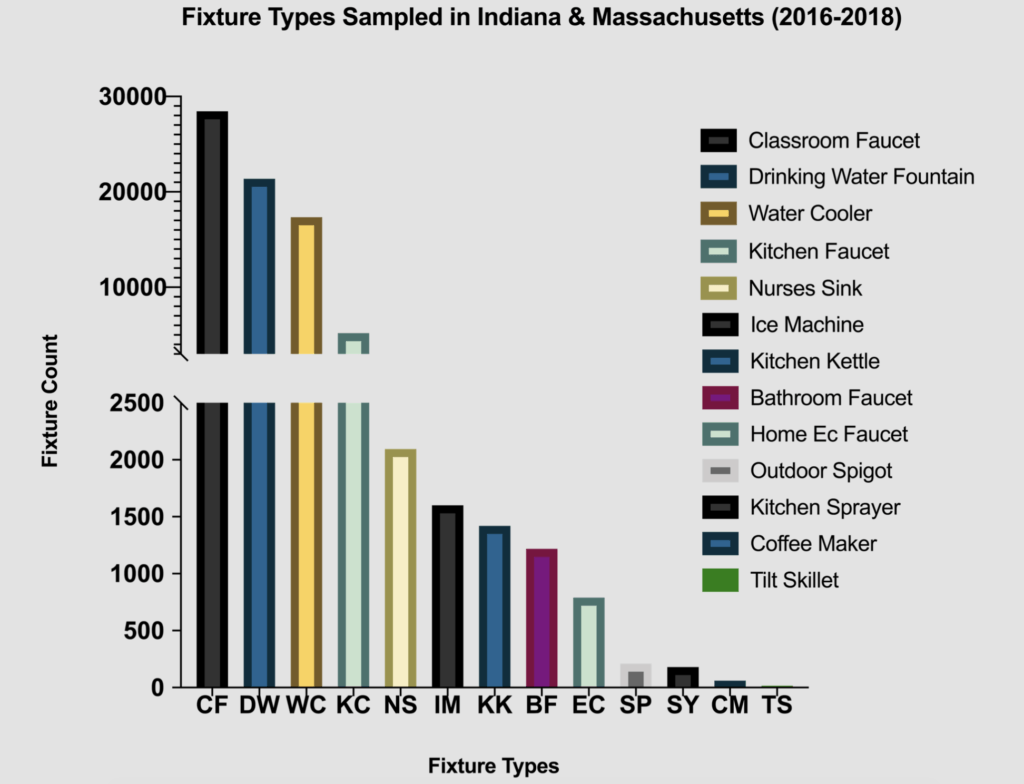 For Massachusetts, the number of classroom faucets, drinking water fountains and faucets in home economics rooms were the most important features in predicting % increases in first draw samples over 0.005 mg/L. 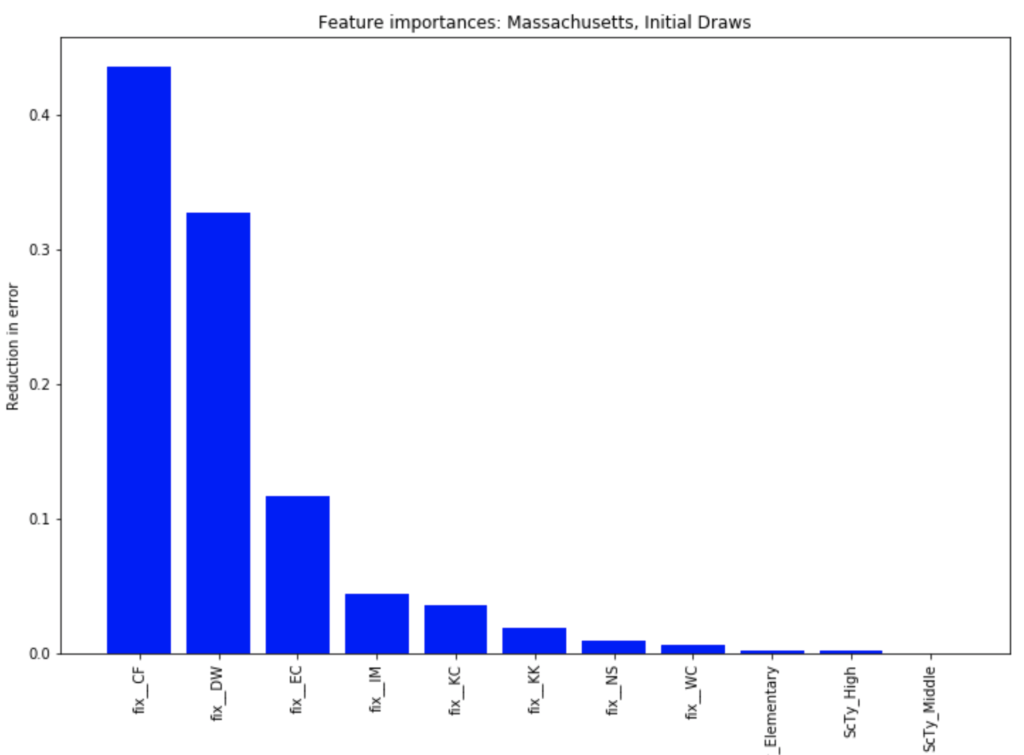 The ANOVA showed significant differences in the average number of fixtures over 0.005 mg/L by school type among first draw samples collected during Indiana and Massachusetts lead testing programs. 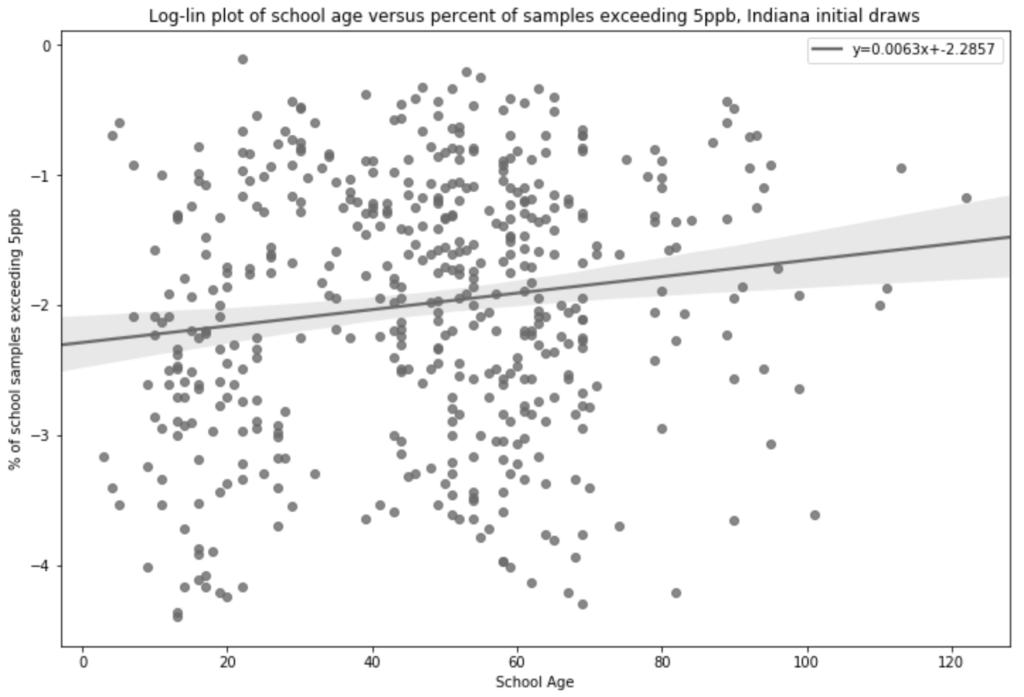 We would like to thank the Massachusetts Department of Environmental Protection and the Indiana Finance Authority for making school testing results available.